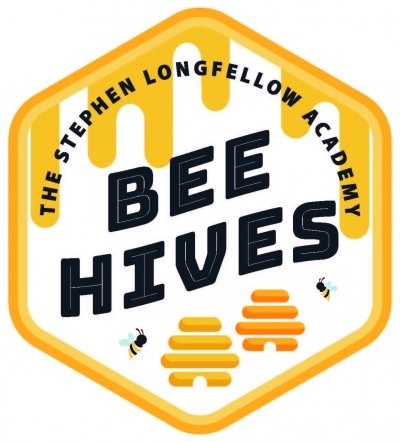 The Stephen Longfellow Academy is located in South Leeds on an area of land that was previously involved in mining. The site was redeveloped into an office estate in the 1990s. Surrounding the academy is a rich variety of plants and trees, with greater than expected biodiversity resulting from the pond and copse of trees. Red kites, pigeons, kestrels, stoats and foxes are some of the species attracted to this green corridor running alongside some of the busiest arterial roads in Leeds. For The Stephen Longfellow Academy, the opportunity to develop the grounds in order to create a Biodiversity Garden in order to encourage the growth of plants and support animal habitats was also a terrific opportunity for our students to lead a conservation project.
One aspect of this has been the establishment of our Beehives. Between September 2019 and June 2020, colleagues from TSLA were trained in beekeeping by members of the Leeds Beekeepers Association. This partnership allowed us to establish our fist hive in August 2020, and we have been able to use this resource to immediately teach students the skills of beekeeping.
Curating the hive will allow students to take responsibility for the feeding and health of the hive, preparing the bees for changes in the seasons and to be ready in spring for the production of new queens. From one of these we will establish our second hive and begin the enjoyable task of producing honey.

Term 1 Updates
We’ve been busy preparing the hive for the winter shut down. During this period the number of bees reduces from a summer high of 60,000 to around 10,000. We also have to ensure that we provide enough food in the form of fondant and control disease such as Nosema mites. Getting these steps right now will ensure the hive remains healthy during winter and that the queen has enough resources to lay enough eggs to repopulate the hive. 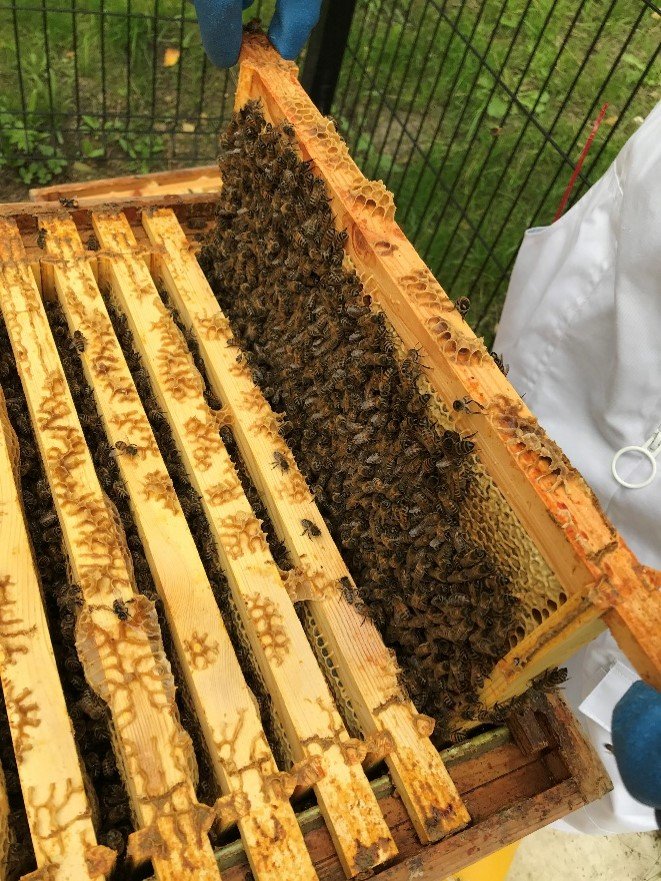 A frame from the “Super” box of the hive. The bees are busy producing and storing honey which they make from plant nectar. There is around 40kg of honey in the hive, which will provide much of the energy they need to survive the winter months. 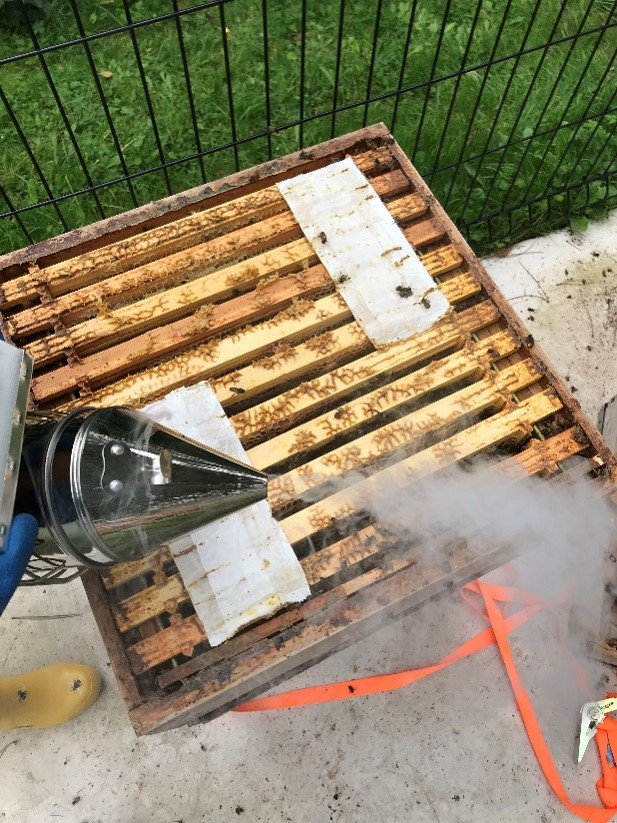 Jake in Year 10 smoking the hive to calm the bees and applying strips of formic acid to kill of harmful Nosema mites which can infest hives and prevent the queen from laying healthy brood in spring. 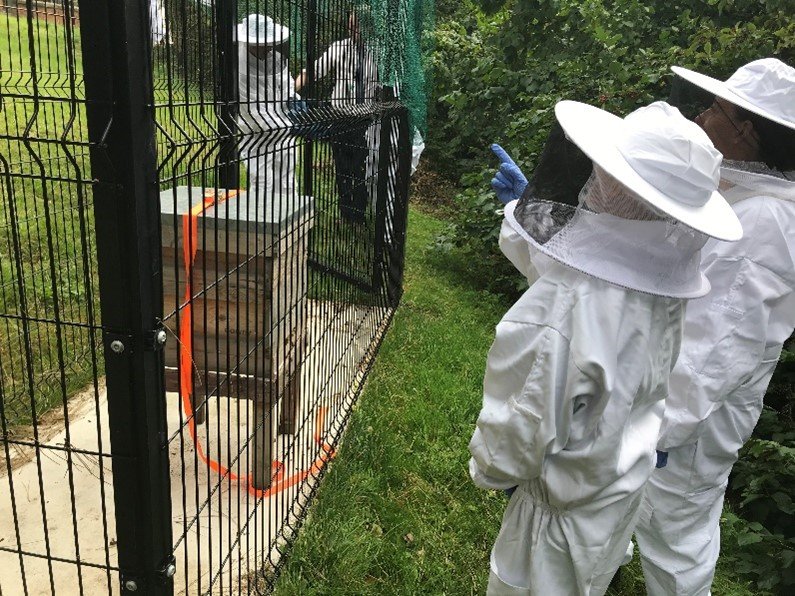 Sharif, Johnny and Will from Year 8 inspecting the hive and getting ready to place a “mouse-guard” on the hive entrance. Mice like to creep into hives – it is warm, and the honey is very tasty. They can do quite a bit of damage, and so fitting guards before the first frosts prevents this. 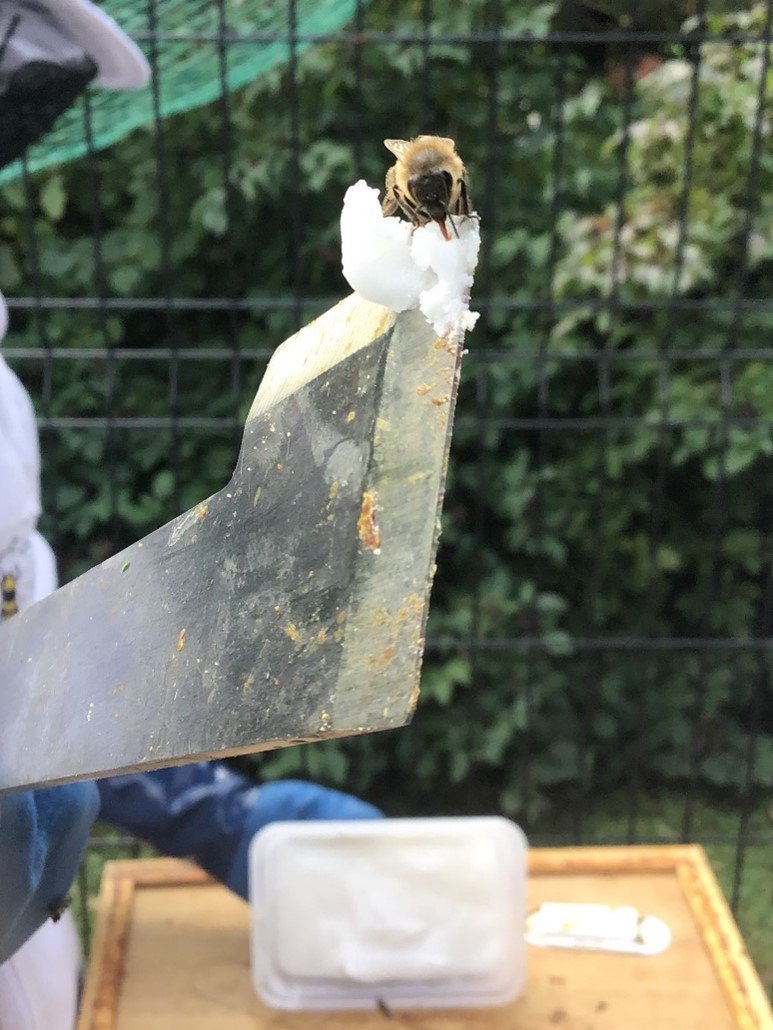 Jake in Year 10 has become adapt at managing the hive after a couple of visits. He is placing a block of fondant over the top of the hive for the bees to feed on during the winter period. In total, we’ll place around 3 blocks between now and March, with the fondant topping up the food the bees have already made, in the form of honey.

Jake Thurston2020-10-14T12:18:30+01:00
We use cookies to ensure that we give you the best experience on our website. If you continue to use this site we will assume that you are happy with it.OkPrivacy policy